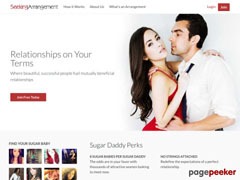 SeekingArrangement, the world’s largest sugar daddy website, is about to launch Chinese version. Whilst other rich men dating sites may offer you long lasting love or passionate one-off encounters, SeekingArrangement offers a dating service, pairing successful and sophisticated men and women with younger, attractive men and women who are looking for no strings attached mutually beneficial relationships. The site is an American-based website which was launched in 2005 and since then has established a client base of more than 4.5 million users worldwide, wishing to start a relationship on their terms.

Some possible challenges SeekingArrangement will encounter in China:

The Media in China have dubbed the site a “broker for gold diggers” and it has created controversy on the mainland since its launch of SeekingArrangement.