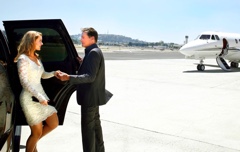 When I was in university, my friends and I, free from the confines of our parents for the first time, began dating in earnest. Most of us dated our peers. But while we went out with broke, young students or our peers from our classes, one friend who I will call Lauren (she wouldn’t want me to use her last name) dated a much older man. We were in awe as he came to the dorms every few nights to pick her up in his fancy luxury car. He wouldn’t come inside, but rather call her from the car. Every week, she would go on expensive shopping trips and come back laden with bags from trendy boutiques, and once in a while, she would sport a new piece of expensive jewelry. While the rest of us went to Florida for Spring Break, she went to Ireland. On Facebook, she posted pictures of herself kissing the Blarney Stone.

Of course, we were all curious. Who was this mystery man, and how could she afford all of these new things? We knew that she came from a small town, and like the rest of us, she was a student. She didn’t have a part time job.

So one day, as we were all sitting around in the student lounge, we decided to ask her. We were all shy about asking, but she was very straightforward with us.

“Jason is my sugar daddy,” she said. (Of course, Jason is not his real name either.) We were all shocked. How did this happen? What was it like? We were dying of curiosity. Lauren met Jason at a bar. She caught his eye. She is very beautiful, of course, but more than that, she is a lovely, friendly, kind, and humorous girl. She loves animals and volunteers with the homeless. She was studying art history and wanted to work in fundraising for a national arts foundation. Of course he would be attracted to her.

She said that he propositioned her. He told her he was 52 – more than 30 years older than she was at the time – and that he was separated, but not yet divorced. He had a daughter and a son that he only saw on weekends, but they were nearly out of high school themselves, and getting closer to independence. He told her that he thought she was beautiful and wanted her by his side – but that he couldn’t commit to a relationship. She was shocked at first. Why would she want to be with someone who couldn’t commit?

Then he told her what he could give her. She wouldn’t have to work anymore. He would give her any money she needed to buy clothing and makeup. He’d pay for her school books and take her out to the best restaurants and occasional trips. She could come with him to important art functions, where she could meet people important to her future career. In return, she would be exclusive to him, and be available to him, and be kind to him. She thought it was a great deal and genuinely liked him. It was a respectful relationship, she said, and perfect for her life at the time.

Although eventually, the relationship ended, and Lauren married someone closer to her age, she never forgot him, and they remain friends to this day.