What Victoria & David Beckham Teach You About Dating 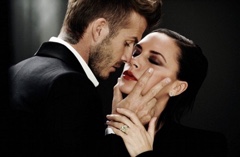 Before William and Kate, they were England’s other (and unofficial) royal couple. Spice Girl Victoria Adams and Manchester United soccer star David Beckham met in November 1996. The couple described it as love at first sight.

Now, four children and 20 years later, the couple known as Posh and Becks is still going strong. They’ve far outlasted most Hollywood relationships, increased their net worth, and most importantly, they are still happy, and are a model family.

How did they do it? However you feel about Victoria’s music, or her fashion design career, and regardless of how you feel about soccer, this couple has a lot of things to teach you and I about dating. Their relationship isn’t just about dating a millionaire – it’s about the fact that they were both elite singles, with great careers to start, and that they continue to grow together. Here’s what Victoria and David Beckham can teach us about dating, and finding the partner of your dreams.

Don’t rely on someone else for success

Victoria Adams found great success in the 1990s as Posh Spice, arguably the most interesting and sexy member of the Spice Girls. She had her own career, her own fortune and was holding her own just fine without a man. David Beckham was already a soccer star with Manchester United. Both were doing fine without each other, and certainly didn’t need each other’s money. That means that they found love organically, and stayed in their relationship because they wanted to, not because they needed to. What you can take away from their relationship: Don’t rely on someone else’s success – make your own way in life doing what you are good at.

They continue to grow together

Since getting together, David Beckham has continued to flourish as Manchester’s greatest player, and Victoria has started her own line of clothes and handbags – and her label has done very, very well. Both are continuing to grow and develop themselves. Of course, they are parents to some of the most adorable celebrity children out there, which keeps them learning together and bonding. What you can take away from their relationship: Continue to learn. Don’t rest on your laurels just because you are in a safe relationship where you are pulling in a good income.

Even though they have been a couple for nearly 20 years, age has not made Victoria and David lazy in their looks. Beckham needs to keep fit of course, for his job, and we dare say that Victoria looks even better and more stylish than she did when the couple was first married. What you can take away from their relationship: Don’t let your looks go just because you’ve been with your partner for years. There are lots of fish in the sea, and there are certainly many people vying to get together with either David or Victoria. Work to keep your partner interested in you, physically.